In order to celebrate their 20th anniversary, the Cumbrian charity, Carlisle Key are hosting an evening of local performers at Carlisle's Old Fire Station on May 12th 2017. The charity helps vulnerable 16 to 25 year olds to gain the confidence, support and resources they need to avoid the risk, or resolve the reality, of homelessness.

The event is being organised by the charity's Project Manager, Clare Brockie. Clare said she was very much looking forward to the evening, as there are some great bands on and it's an opportunity to celebrate the great work performed by Carlisle Key. In addition, all proceeds from the evening would go the charity, enabling them to further their important work.

The evening’s headliners, Cosmic Cat are a well-known Carlisle institution, having played their own unique brand of hook-laden British guitar pop around the Great Border City for a staggering 25 years. The band have previously supported the likes of Echo and The Bunnymen and the Damned, but their twin-guitar attack, harmonic vocals and uplifting choruses make them more than worthy of this headline performance.

6 piece melodic alt-rockers Blind Fiction, have been active around the city for the last five years. The band will be playing released their debut EP, the Post Truth at the end of March  Having undergone a number of line enough line-up changes to make even fans of the Fall quite dizzy, the band have now settled on a six-piece set up that best demonstrates their own brand of melodic alternative pop. The band, whose debut EP, the Post Truth was released at the end of March feature female harmonies, inventive surfy guitars and driving rhythms.

Holiday are a grungy three-piece, fast making fans due to their hypnotic grungy hymns that mine the ground between Sparklehorse and Slint. The band, whose membership is split between Penrith and Carlisle made numerous appearances at Carlisle’s Moo bar and are also appearing at the city’s arts festival.

KVEIS are the brainchild of Penrith’s Joe Marshall and feature members of Beachmaster, Die No More and Holiday. The three-piece play lively alternative rock that would give Pavement a good run for their money.

Tim Baugh is a regular performer around Carlisle’s open mic sessions and has also been seen performing alongside Clare Roberts and various members of Hardwicke Circus. Tim will be no doubt warming the crowd up with a fine selection of covers and self-penned tunes. 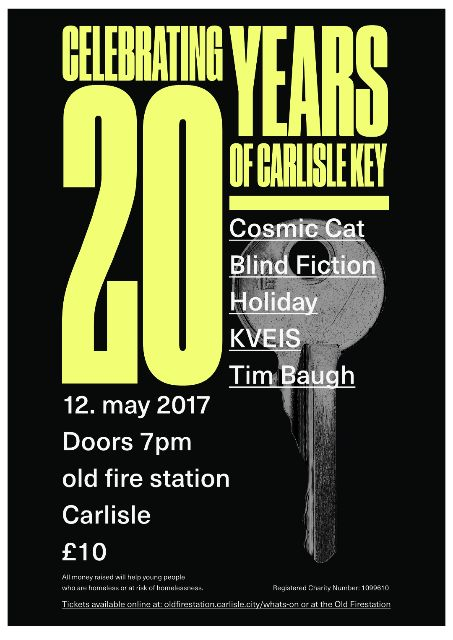